With an elegant and understated décor throughout the hotel, the 212 rooms and suites include air conditioning, satellite television,... With a stay at Sheraton Quito Hotel in Quito (La Carolina), you'll be minutes from Quicentro Mall and Atahualpa Olympic Stadium. This 4....

Hotel Finlandia has 55 rooms and it is located in Quito's financial center and close to major shopping malls in the city. Mariscal Sucre...

The Best Western CPlaza Hotel have work desks, a refrigerator and free cable on 2 flat-screen TVs. All the suites have air conditioning,... 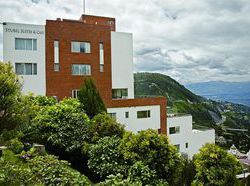 Stubel Suites andamp; Café offers an unforgettable, modern and relaxing experience for both business and leisure travelers. There are 25...

This modern hotel in the center of Quito offers stylish rooms and minimalistic decor. All rooms at the Nu House Boutique Hotel have a...

Located 1.9 mi from the historic center of Quito and near the World Trade Center, this hotel features luxurious accommodations with a...

This chic hotel with spa and brand new gym facilities is located in the heart of the lively Mariscal district. All rooms have city views...

Located in the center of Quito, the 5-star Hilton Colon Quito Hotel offers a heated outdoor pool, a spa and a fitness center. Guests can...

Mercure Hotel Alameda is located just steps away from the Artisan Market on Quito’s showcase shopping street, Avenida Amazonas, within...

Standard rooms are spacious and well furnished in traditional style, they are all carpeted, tv and private bathroom. Restaurant Mistral...

With a stay at Vieja Cuba Hotel in Quito, you'll be minutes from Mindalae Museum and Gabriela Mistral Square. This hotel is within close...

The hotel has 210 guest rooms. Rooms are equipped with, cable TV and wireless service free of charge, Restaurant is located in the... 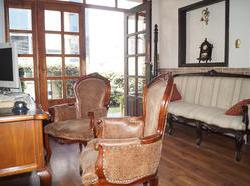 Property Location A stay at Muros Quito places you in the heart of Quito, convenient to Trude Sojka Cultural House and Atahualpa Olympic...

San Francisco of Quito, better known as Quito, is the state capital of Ecuador, and the oldest existing capital in South America. Although it is the capital of Ecuador, it is not the countrys largest city, but is still the political, administrative and cultural locus. Like many of the surrounding cities, Quito was declared a World Heritage Site by UNESCO, an international declaration of the citys singular beauty and multitudinous attractions.
The history of Quito goes back to prehistoric times, showing how this city has remained a historic point of interest for numerous ethnic groups. After centuries of change and evolution, including independence at the beginning of the 19th century, it is today a dynamic city with many places of interest where the calm lifestyle contrasts with the cultural wealth of the zone.
Located in the shade of the Andes mountain range, Quito is surrounded by many mountains and volcanoes which give it a slightly threatening aspect, but dont believe this. The city has undergone many changes due to economic development and population growth, and new districts coexist alongside the mountainous landscape of the citys environs. Pleasant temperatures reign throughout the year, making a visit to the city possible in any season, although it typically experiences abundant rain during the spring equinox.
With the largest historical center in all South America, Quito contains a variety of tourist attractions to appeal to the adventurer, the entrepreneur and the iconoclast. After many years of neglect, the old city center has undergone extensive remodeling, making a stroll through its streets a pleasant memory to take home with us. Explore its most attractive monuments, such as the Basilica del Voto Nacional in Neogothic style, the Metropolitan Cathedral and the many churches, which, as in the other South American cities, demonstrate the high value these countries attach to religion.
Apart from religious sites, Quito offers an array of museums in which to lose oneself, like the Capillo del Hombre (Chapel of the Man) or the Templo de la Patria (Temple of the Mother Country). Another of its enchantments lies in the numerous parks and gardens in which to take a pleasant stroll. Possibly the citys most distinctive point is what is known as la mitad del mundo (half of the world); it is here where the center of the globe rests, and the reason that it is now known as parallel zero, that line which divides the world into north and south: the Equator has a monument dedicated to it as well as its own museum near Quito. This is an unforgettable place for a unique experience.

In Quito we will have heavy intensity rain, nice temperatures expected throught the day.

Points of Interest in Quito

It depends on the category of the hotel. If you want to stay at a 4-star hotel in Quito, the average price per night is €37, while you will pay an average of €24 for a 3-star hotel, and in a more luxurious 5-star hotel, you"ll pay around €72.

You can make reservations at Hotel Plaza Grande, Hotel NH Collection Royal Quito and Hotel Jw Marriott Quito if you"re looking for a hotel with valet service for your visit to Quito.

If you´re looking for peace and quiet and want to stay at an adult-only hotel in Quito, we recommend Best Western CPlaza Hotel.

According to our clients, if you´re travelling with children, the best hotels in Quito are Hotel Andino, Sheraton Quito Hotel and Swissotel Quito.

If you want to save time, the hotels in Quito with express check-in and check-out are Sheraton Quito Hotel, Hotel Andino and Hotel Lugano Suites.

Some of the options for hotels with non-smoking rooms in Quito are Hotel Plaza Grande, Hotel NH Collection Royal Quito and Hotel Jw Marriott Quito.

If you're bringing a vehicle, we recommend that you book a hotel with parking in Quito, like Hotel Plaza Grande, Hotel NH Collection Royal Quito or Swissotel Quito.

The best hotels with a pool in Quito are Swissotel Quito, Hotel Jw Marriott Quito and Hotel Hilton Colon Quito.